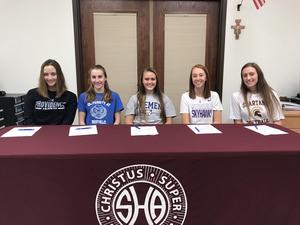 Congratulations to our five student-athletes who signed National Letters of Intent after school on November 19, 2018.

Lily Dimmig –is signing with Division 1 Providence College in Rhode Island for swim. A four year member of our championship swim team, Lily represented SHA at States three years in a row and holds the school record in the 200 medley relay.

Victoria Franz – is signing to dive at Division 1 University at Buffalo. Victoria is a 6 time national qualifier and is currently ranked 18th in the nation.

Nicole Grichen – is signing with Division 2 Daemen College for soccer. Nicole was named to the All Catholic First Team is season. She was one of the captains of the team this year and led the team in assists with 8 and was second in scoring with 8 goals.

Emily Kase – Emily is signing with Division 2 Stonehill College in Easton, Ma. Emily is the current All Catholic champion and will represent our diocese at States in May. This will be her 4th trip to Catholic States. Also, she has competed at the Federation Tournament every year so far.

Athena Zak – Athena is signing with Division 2 St. Thomas Aquinas in Sparkill, NY. An infielder with the Sharks, Athena was named to the All Catholic First Team last season. Outside of SHA, Athena plays with the NY Pride.