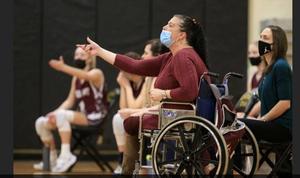 Carrie Owens coaching basketball would usually not be big news. She’s been coaching the sport for years, including at Sacred Heart since 2017.

But given what happened to Owens, it’s amazing she was on the sidelines for the Sharks’ game against Nardin on Feb. 26 at Villa Maria College, a 50-44 win, which was also chosen as the Amherst Bee’s 2020-21 Contest of the Year.

Owens’ life almost ended in a motorcycle accident on a sunny and warm November day.

Her injuries from the accident were numerous. Her left leg was amputated where the kneecap bends. She suffered a torn meniscus and lateral ligament damage in her right knee, and a dislocated right wrist, along with ligament damage. Her left femur was broken in half and a steel rod was inserted to help it grow back together. She had bone fragments in her right quad muscle that calcified.

Prior to the game, Owens had been coaching virtually from her home as she awaited clearance by her doctor to return, which she received on Feb. 24.

Owens watched a livestream of the game on the school’s YouTube page and provided immediate feedback through a Zoom link on an iPad that was on the bench.

Assistants Rachelle Matthys and Kristy Roesch, who Owens credited with for being flexible and adaptable all season, handled the in-person coaching duties.

“Oddly enough, I was nervous,” Owens said. “It felt like it was my first game coaching ever. I didn’t know if I had lost my mojo because of the accident. I was also in pain and was conscientious about how I looked physically in a wheelchair. I also felt a lot of pressure to win. I didn’t want to lose to Nardin because I hadn’t lost to them. They lost to them the first time when I wasn’t there. That was very hard coaching virtually.”

Owens’ nerves went out the window when she arrived to Villa Maria. She said she got a rush when she entered the building and saw her players in the locker room for the pre-game talk.

She said she’s watched the game over and over and every time she gets chills and goosebumps because of the sheer emotions and how much that particular day and game meant to her and the team, and how it jump-started her return.

“Right then, I thought that it’s go time,” Owens said. “It didn’t matter if I was nervous or not or in pain. I felt this warm feeling come over me. I was back. It didn’t even take two seconds into the game before I realized that I didn’t lose my mojo.”

Owens was in a wheelchair but other than that, she was the same old Carrie.

The Sharks trailed Nardin, 23-18, at halftime and Owens told her players they were playing too passively.

A critical play came with the Sharks down, 34-27, with 2:22 left in the third quarter. Owens contested a timeout called by Nardin as one of the Sacred Heart players was driving in for a fastbreak layup.

Even though Nardin called the timeout, the referee awarded the Sharks possession of the ball. Sacred Heart outscored Nardin, 15-10, in the fourth quarter.

“My girls didn’t let off the pedal after that,” Owens said. “That propelled them and we didn’t lose the lead for the rest of the game. We played our game and I saw the aggressiveness and tenaciousness, and their fight, hunger and will to win. They didn’t have the spark and fight in them the first time they played them when I wasn’t there. That is not a knock against my assistants because they are top-notch coaches. The girls just don’t have that relationship with them that I have had from coaching them over the years.”

“It was so different when she was online,” said Sharks’ junior captain Morgan Giancaterino after the game, who finished with 11 points, four steals and one rebound. “In person, I think she boosted our energy and brought the team closer together than before.”

Owens also switched defenses in the second half, from zone to man, and increased pressure on Nardin’s guards, which she also said helped propel the team toward the victory.

“Our defense ended up being our offense,” Owens said. “That is what gave us that spark.”

Sacred Heart was also more aggressive, going to the hoop and making 9 of 18 free throws throughout the game.

The Sharks also scored 36 points in the paint, caused 23 turnovers, scored 22 points off the miscues and outscored Nardin, 12-4, in transition points.

Meghan Trapper scored 13 of her 15 points in the second half. Ten of her points were in the paint. She also tallied 10 rebounds and three steals.

Mariah Huss was also in double figures with 10 points. She also tallied four steals, two rebounds and one assist.

Owens said the game wasn’t about getting the win, per se, but more about the fight and the girls bouncing back from the first loss.

“Our theme for the whole season was being resilient, between my accident and what the girls had to overcome with the pandemic and being coached virtually,” Owens said. “That is what the girls showed and they didn’t back down. Winning was icing on the cake. It set the tone for the rest of the season.”

Unfortunately, Sacred Heart only played two more games, a 71-51 loss against Cardinal O’Hara on Feb. 28 and a 54-44 victory over Mount St. Mary on March 4, before its season ended due to the team going on a 10-day COVID-19 pause.

Owens has continued to recover from her injuries since the season ended. She received her prosthetic leg at the end of March and started to walk in it during physical therapy in April.

She’s had two surgeries in May on the leg that was amputated that has forced her back into her wheelchair full-time. The first surgery was to remove pins from her femur so the top half could drop a little to fuse with the bottom half. The other surgery was to make a 6-inch incision in her quadricep muscle and remove bone fragments that were making it painful for Owens to walk in her prosthetic.

She will be back in physical therapy in September so she can relearn how to walk in her prosthetic leg.

She expects to have one more surgery this year to fix torn ligaments in her right wrist.

Owens said she is meeting with a new doctor to possibly have osseointegration, a surgical procedure that aims to offer better quality of life and improved function and mobility to people who have had an amputation.

Owens said the surgery involves inserting a metal implant into the bone of a residual limb, which then attaches directly to a prosthesis, eliminating socket-related issues. If she has the procedure done, it wouldn’t be for a year or two down the road.

“It’s supposed to allow me to walk pain free,” Owens said. “My prosthetic I have now is bulky and heavy, and it’s painful. I’m hoping to get that done, but it will would be years down the road.”

She hopes that she will receive enough physical therapy to walk across the stage at the inaugural class of the D’Youville College Athletics Hall of Fame on Sept. 26.

As bad as the accident was for Owens, there are many positives that have come from it.

In May, Owens attended the 2020 Naismith Memorial Basketball Hall of Fame where she met Will Waller, the CEO of the National Wheelchair Basketball Association, and discussed with him about being involved with wheelchair basketball and adaptive sports in the near future.

In July, she was the guest speaker at the “Ride with Grace” to spread motorcycle awareness to support Grace House, a nonprofit that provides families a place to stay when a family member is injured badly and receiving care at regional health care facilities.

She has also been asked by Jill Watson, her high school coach from Pulaski, New York, to speak with a student who is an amputee.

“As bad as this accident was, it’s changed my life for the better,” Owens said. “People don’t know how strong they are until they are forced to be put in a situation where they have to be. Through this, I have found that I am a lot stronger than I thought I was. I guess the message to people is to turn your struggles into strengths and to never quit, never give up and to never give in.”