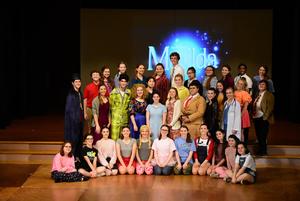 The cast and crew of SHA’s fall musical, 'Matilda - the Musical' were a nominated school for the 2020 Kenny Awards  - an event to honor the excellence in musical theatre amongst high schools all across Western New York

The Kenny Awards were scheduled to take place on Saturday, May 16, on the stage at Shea's. Needless to say, the SHA students involved in the musical as well as all the other nominated schools are disappointed to not be participating in the day-long clinics and workshops as well as the evening stage performance and Awards ceremony.

However, the Kenny Awards team created a professional video featuring excerpts from Matilda as well as interviews with members of the cast with leading roles.  To be nominated for a Kenny Award is quite an accomplishment and so, while the musical won’t be formally recognized this Saturday, we want you to enjoy this video to remember why it was nominated! Once again, congratulations to the cast and crew.. .they should be proud of this recognition.

We are also excited to announce that the fall 2020 musical is… “High School Musical 2”!