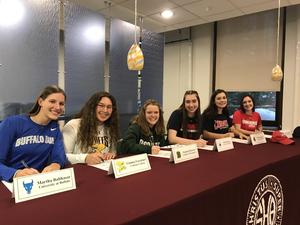 Congratulations to our six student-athletes who signed or committed to attend college for athletics on November 14, 2019.  See WIVB's coverage of the signing.

Martha Balthasar – University at Buffalo Bulls Softball. The starting pitcher for the Sharks, Martha was an All Catholic First Team selection for the past two years.

Gianna Fazzolari – Canisius College Golden Griffins Softball. Gianna returned to us after spending her junior year at Lockport HS.  She was All Catholic First Team both freshman and sophomore years.

Jacquie Klawon -  College at Brockport Golden Eagles Field Hockey – Today, Jacquie is committing to attend Brockport.  She is the lone three-sport athlete in the Class of 2020.  In addition to field hockey, she is on the MMHSAA Ice Hockey team and our lacrosse team.

Abby Ruggiero – Cornell University Big Red Ice Hockey – A member of the Buffalo Regals since the age of 8, Abby played one year on the MMHSAA combined team.

Siobhan Ryan – University of Richmond Spiders Basketball – Siobhan is the reigning MMHSAA Class A Player of the Year and All WNY 2nd Team.  Each year she played, the team has gone to Catholics States and won it her sophomore year.  She is on track to break the SHA all time scoring record.  She needs 355 points. Siobhan also plays volleyball and made All Catholic First Team the past two years.

Rory Schaeffer – St. Francis University Red Flash Soccer.  A talented defender and team captain, Rory has made All Catholic First Team for the past two years.  This season she received All WNY Honorable Mention.