Dr. Laurie Hess Sperry '82 spoke at the commencement exercises for the class of 2018 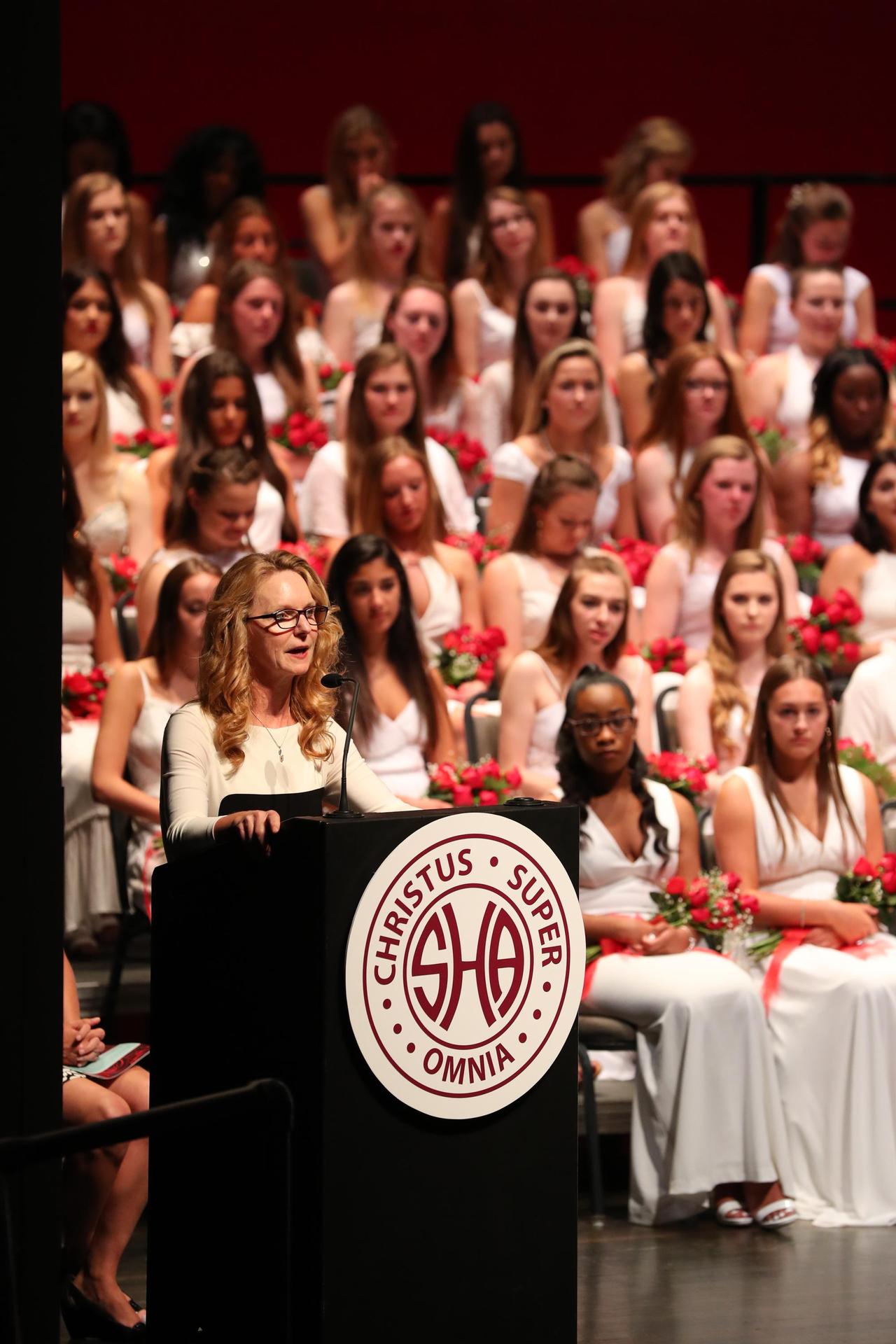 At the recognition dinner, Laurie spoke compellingly of how her experience at Buffalo Academy of the Sacred Heart formed her drive to help others, prepared her to excel in her personal and professional endeavors, and connected her to a sisterhood of women she continues to hold dear.

In June 2018, Laurie returned as the featured speaker at the commencement exercises for the class of 2018. Her words were an inspiration for our graduates, their families and all who gathered to celebrate.
"Give us your girls, and we’ll give you back young ladies." It was the Fall of 1978 and Sr. Karen Allen, a pint-sized nun, barely able to see over the podium stared solemnly out at the incoming Freshman class and their parents. I looked around at the motley crew assembled in the auditorium and thought, “Well, good luck with that!” But in true Franciscan style, that statement was one of humility- because Sacred Heart gives back so much more than young ladies- they give the world powerhouse women!

Graduates of 2018, you received a world class education, but did you also realize that while you were learning chemistry you were being exposed to a hidden curriculum and learning life lessons that gave you the tools to navigate the life that’s before you? In preparation for this evening, I reached out to the vast SHA network going as far back as the 1960s – posing this question, “What LIFE lessons did you learn at SHA?” Some were simple- “I learned to be kind.” Others were bold, “Women can do ANYTHING!” Many former athletes said that Sr. Maria had an enormous impact on their lives. She was famous for saying, “You play for the name on the front of your jersey, not for the name on the back of it!” That lesson served them well as wives, mothers and professional women when they were called upon to make decisions for the good of the group rather than just the good of the individual. Many grads who went on to lives of public service shared that it was Mrs. Mary “Freebird” Freeland who taught them that no only could they make a difference in the lives of the poor and marginalized, they had a moral obligation to! Another grad said, “ I got to experience a world run by women for four years!” This same graduate is the director of Human Resources for a Fortune 500 company- so now she’s a woman running the world! One graduate opined that, “You can evade the CIA, you can hide from the FBI, but the alumnae office of SHA will always be able to find you!”

I learned some lessons along the way too. When my family couldn’t afford the tuition at Sacred Heart, the financial aid office said, “We’ll find a way.” Well I drew the short straw, and had to clean Sr. Marcyann’s classroom. For those of you who survived European Cultures your Sophomore year, you can imagine my terror. Who knew that the exacting perfection that she demanded in how I had to line up desks in her classroom with military precision would serve me well in my future roles as an editor and researcher managing large data sets. Sr. Marcyann also expected us to come to each class having read a current event in the news and to be prepared to discuss it intelligently. She required us to be informed about our world- for what we do not know, we cannot protect.

It was Sr. Mary Prudentina (while her name may be a complete fabrication on my part, the rest of the story is true) who caught me taking my jeans off under my uniform skirt on one of those bitterly cold Buffalo days that turns your legs purple. Sr. Prudentina glided up to me in full habit and gently admonished, “First modesty goes, then virtue!” Turns out she was right- so thank goodness for Mrs. Eileen Cortade, a pioneer back in the 70's, who taught us not only to respect our bodies, but to take responsibility for them!

Sometimes the lives of SHA graduates didn’t turn out the way they thought they would. One graduate said that shortly after she adopted her third child, her young husband passed away suddenly. She said, “I knew then that Sacred Heart had given me the tools I needed to take care of my children and myself. It’s a lesson I’ve passed on to my daughters.”

I agree. You see, Sacred Heart has taught you to handle life’s disappointments with the grace of a woman, not the grief of a child. Most of the women I heard from spoke of the sisterhood and friendships that have lasted a lifetime. When I asked my best friend of nearly 45 years what she learned at SHA, well…. Since I’m not sure what the statute of limitations is on some of her shenanigans, I’ll say this…… Look around you class of 2018. Your sisters, the women sitting next to you? They’ll be there for you when you hold your baby’s hand for the first time. And your mother’s hand for the last. THIS is the unbreakable bond that has been forged. It’s probably difficult to imagine your 35-year reunion. I was fortunate enough to attend mine. Looking into the faces of my classmates, I realized we were a mosaic and our uniqueness added to the beautiful tapestry we had become. Sacred Heart celebrated our individuality rather than blending us all together where we all ended up the same.

Graduates, your time has come. Be bold, be brave, be kind. Go with the knowledge that Sacred Heart has given you the tools you’ll need to navigate your future. And as you go, to paraphrase Ayn Rand, “The question isn't who is going to LET you; it's who would dare try to stop you? Congratulations class of 2018."