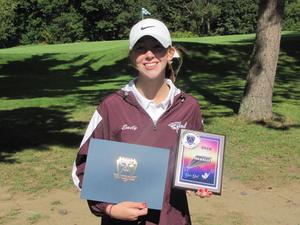 Senior, Emily Kase moves on to the CHSAA States in May.
For the second year in a row, Emily Kase is the All Catholic golf champion.  On Saturday, 9/29/18 at Elma Meadows, Emily tied with a Nardin golfer after 9 holes with a score of 44.  A playoff was held to determine the champion and Emily won the playoff in one hole.  Emily, along with teammate and fellow senior Gia Bolognese, will move on to compete in the CHSAA States in May 2019.  Gia finished in 4th place with a score of 48.  Sophomore Grace Gilbert tied for 6th with a score of 50 and senior Rebecca Worling finished in 8th place with a score of 57.
The Sharks finished league play in second place with a 6 win 2 loss record.  Emily Kase led the Sharks and the league with an average of 38.6. She completed in five league matches and was the medalist in all of them.